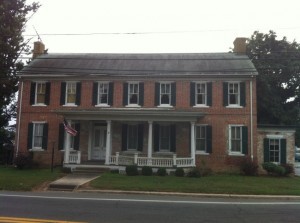 The origin of this community can be traced to the mid-18th century, when growing travel between Dover and the head of the Chester River resulted in the establishment of a Public House here to support the needs of travelers. Increasing commerce led to the growth of settlement. First known as Grog-Town and Lewis’ Cross Roads, the village was formally named Kenton in 1806.

A post office was established here in 1857. With the arrival of the Maryland and Delaware Railroad following the Civil War, the town became an important shipping point for local goods and products. By the 1880s the town was home to 300 residents and a number of thriving businesses. On April 22, 1887, the Town of Kenton was formally incorporated by the Delaware General Assembly. The Public House is not currently on the Historic Registry. It is privately owned and is not open to the public.