Welcome to the Town of Kenton 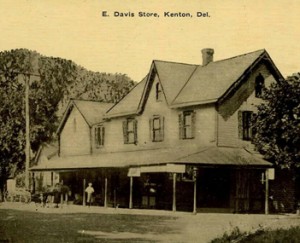 The Village of Kenton is a crossroads community located at the intersection of Route 42 and Route 300 in Kenton Hundred Delaware. Kenton was first laid out in 1796 by Philip Lewis who had begun to acquire property in the area five years before in 1791. The community was first known as Grogtown, then as Lewis Crossroads and finally, in 1806, by the name of Kenton. The village dates from the last decade of the 18th century, but did not achieve its peak until the last half of the 19th century when the Philadelphia (Wilmington and Baltimore Railroad) (Delaware and Maryland Railroad) line was put through from Clayton to Maryland.